Book Review for THEY KEPT RUNNING

“There is a laugh-so-you-don’t-cry shade of humor in Ross’s work that makes her razor-sharp observations about how men abuse women easier to take. So when this optometrist touches the narrator’s eyeball (I know–I gasped too) I laughed out loud when she wondered “How do I know he’s not some pervert who gets off on touching people’s eyeballs?” This is something Ross does well throughout the collection–injects a moment of levity into a situation that so accurately depicts what it means to be a woman and lose your voice or be paralyzed by fear. In “Snapshot,” a woman who is driving sees a man on the side of the road with his head in his hands. Later, she tells her husband about it, saying “she’d pictured herself pulling over, knocking on the man’s window, saying something to comfort him […], but what if he’s a misogynist? What if he’s violent?” She tells her husband “[t]hat’s what it is to be a woman in this world. You can’t even empathize with a stranger without thinking about your own safety.” To which her husband replies, “Probably he wasn’t a misogynist.” He completely (and hilariously) misses her point entirely. ” –Frannie McMillan, SmokeLong Quarterly 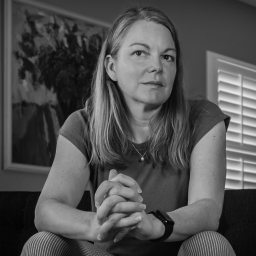